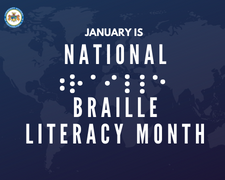 What is Braille Literacy?

The Braille system was designed by Louie Braille in 1821 when he was just 12 years old. At the age of 3 years old, Braille suffered from an accident that left him blind. While trying to discover a new way to communicate and read, he discovered the French Military code known as "night calling". The French soldiers used this system to communicate at night without having to verbally speak. Braille was inspired by the military code and made it his own.

Here are some quick facts to know about Braille from Ocls.info: